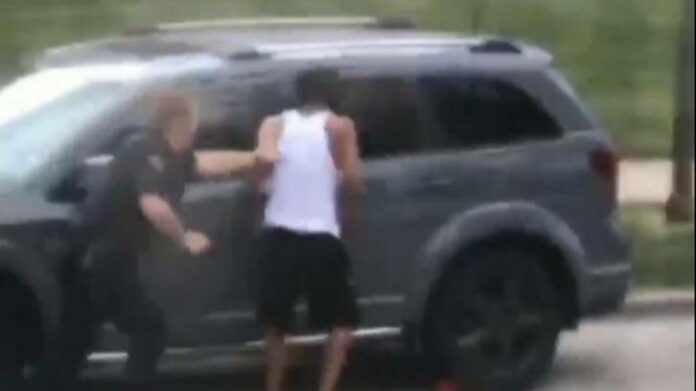 If past history is any kind of indicator, self victimization riots will begin in Kenosha and spread across the country. It’s what most blacks (and their pious white supporters) seem to do best.

Rusten Sheskey, the Kenosha, Wisconsin police officer who shot a knife-wielding Jacob Blake last August, will be found innocent of wrongdoing in a District Attorney report set to be released by next week, a source told National Justice.

According to the insider, law enforcement in Kenosha is being mandated to take on 12 hour shifts every day starting now until January 4th.

Blake’s shooting last summer triggered explosive media-induced race riots that led to multiple deaths and millions of dollars worth of property damage. Left-wing extremists are expected to return to the town to engage in violence yet again after the investigation is publicly unveiled. The citizens of Kenosha are on edge, and rumors of the reports imminent release are forcing homes and small businesses to put up plywood to try and prevent destruction.

According to court documents obtained by National Justice, the August 23rd incident began when Blake went to the home of the mother of his children, in violation of a restraining order for raping her. Blake then took the woman’s phone and car keys as he loaded their children into his car and planned to leave, prompting her friend to dial 911.

Many left-wing and Black Lives Matter propagandists have focused on Sheskey firing upon Blake as he reached in his car because his kids were in the car, but they leave out the vital detail that he had no custody over them and was taking them against the wishes of their mother, which under Wisconsin law constitutes kidnapping. Blake had also been previously seen with a deadly weapon, making the shooting even more justifiable.

According to leaked details of the DA’s report, Sheskey’s use of deadly force was by-the-book according to Kenosha Police Department protocol. Police officers are trained to fire upon emotionally disturbed and violent persons who refuse orders and reach into their car.

Another Kenosha citizen who spoke to National Justice on condition of anonymity expressed dismay at the breakdown of law and order in his city. The FBI is tasked with preventing political violence and terrorism, like what anarchists and Black Lives Matter have in store for Kenosha, but instead they deliberately allow it and punish critics and victims instead. The FBI is currently pursuing federal charges against Trump supporters for burning a Black Lives Matter flag.