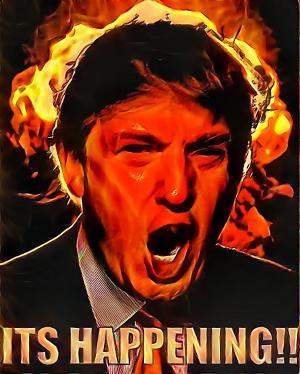 As we have stated countless times, Donald J. Trump is not “our guy,” an explicit advocate for the group interests of European Americans. But, if there was ever a case for a level of systemic corruption (besides the phony Covid “relief bill”) whose stench reaches the pillars of heaven, this is it.

You’d have to be blind not to see it.

As Americans continue to watch the 2020 election controversy unfold, the very same publications that spent years lying about President Trump’s “Russia collusion” are once again telling us what we are dutifully supposed to believe. The Los Angeles Times, for instance, assures us that Trump’s “baseless” and “dangerous” claim “that the election was rigged to benefit Joe Biden” has been thoroughly “debunked.”[1] The New York Times proclaims that “Trump’s false election fraud claims” are founded upon nothing more than a “torrent of falsehoods.”[2] Sneering at “how Trump drove the lie that the election was stolen,” The Washington Post mocks Republicans who “are still pretending that there was election fraud.”[3] And CNN.com warns that “Trump’s obsession with overturning the election” has now begun to spiral “out of control.”[4]

But so much for what the comic books have to say. What follows is a compilation of vital facts that will demonstrate, to anyone interested in following the truth wherever it may lead, that the 2020 presidential election was indeed rife with fraud, and that Joe Biden, if he should in fact be sworn into office next month, will be an illegitimate president from the very start.

Before the Election: How We Got Here

Fifteen years ago, a landmark report by the bipartisan Commission on Federal Election Reform, known informally as the Carter-Baker Commission, advised all U.S. states that in order to guarantee free and fair elections, they should: increase voter ID requirements; minimize the use of mail-in ballots, which “remain the largest source of potential voter fraud”; disallow ballot harvesting by third parties; purge voter rolls of all ineligible or fraudulent names; allow election observers to monitor ballot-counting processes without restraint or obstruction; ensure that voting machines are accurate in their tabulations; and encourage news organizations to “delay the release of any exit-poll data until the election has been decided.” All of these recommendations were widely ignored in the elections of November 2020.[5]

During the months leading up to this year’s presidential race, the Biden campaign assembled a team of some 600 lawyers and more than 10,000 volunteers to “[go] into every single state” in order to “call out local rules that don’t adequately ensure access to vote.”[6]

Beginning more than a year ago, Democrats filed nearly 300 lawsuits in dozens of states[7] – most notably all of the key battleground states – in an effort to change election laws and regulations in ways that would benefit Democrat candidates. For example, they sought to: (a) extend the statutory deadlines by which mail-in ballots could be submitted, postmarked, or received by election authorities; (b) permit people to vote earlier than ever before, in some cases as many as 50 days prior to Election Day; (c) eliminate signature, signature-verification, and witness requirements for mail-in ballots; (d) void state laws that disallowed ballot harvesting by third parties; (e) terminate photo-ID requirements for in-person voting; (f) introduce provisions that would allow for the “curing” of mail-in ballots that contained errors or omissions; and (g) require state election officials to send unsolicited mail-in ballots to every person listed as a registered voter, even though such lists have long been notoriously inaccurate.[8]

Though the Democrats did not get everything that they wanted, they got most of it. Broadcaster and bestselling author Mark Levin, citing the cases of Pennsylvania, Georgia, Michigan, Wisconsin, and Arizona — and their combined 73 Electoral College votes – explains what happened:

“Every one of these states [and others as well] were targeted by Democrats. Every one of these states violated the United States Constitution, Article II, Section 1, Clause 2 [which empowers the state legislatures alone to make election law for each state]. Every one of them, because changes were made to their election systems not by the state legislature, but by other public officials.… That’s 73 Electoral College votes. This is why Donald Trump won the election…. [I]f the federal Constitution had not been violated, yes, Donald Trump would be … president of the United States today. Putting all fraud aside. All fraud aside. This is why you should be furious with the United States Supreme Court, that had as its duty, as its sworn responsibility … to insist that the states comply with the federal Constitution under Article II, Section 1, Clause 2, and that any changes made outside that clause, by governors, secretaries of states, by courts, federal or state, by election boards or other bureaucrats, will be deemed unconstitutional. [The Supreme Court] had a case [in Pennsylvania] … before a single vote was counted, they had a case [alleging unconstitutional changes to election laws] and they didn’t take it up…. [The Democrats] made these changes, they plotted, they planned, they litigated, they pressured, they lobbied, and now we have, if he’s sworn in, Joe Biden, who will be an illegitimate president of the United States in every meaning of that word, ‘illegitimate.’”[9]

The Implausibility of Trump’s Loss….