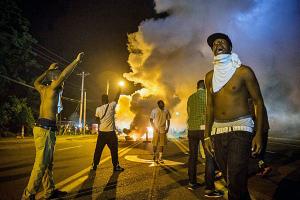 REASONS BEHIND RIOTING are evident: 40 years ago college cost so little it was almost free.

Now millennials are ridiculed and scorned for living in their parent’s basements.

This was caused by the Federal Reserve printing and lending more and more money. Students were not permitted to declare bankruptcy to escape their oppressive debt. Naturally, the colleges charged more and more money as money was easy to obtain. Colleges had to pay their professors (Marxist and others), more and more, to keep other colleges from hiring them. Everything cost more in college towns: rent, eating out —the entire service industry. Textbooks came not bound, but three hole punched, cheap to reprint but impoverishing to buy.

So the millennials racked up debt. Many went way past $80,000. Some exceeded $200,000 pursuing advanced degrees. The bankers and loan sharks got richer; so did the universities and the service industries in college towns. Marxist professors drove nice cars and pontificated about communal sharing. Nobody shared with the millennials, they rode buses or walked.

The millennials got frustrated. They couldn’t afford second hand cars let alone a house or family. Most were not taught economics so instead of raging against the money printers, and the politicians who controlled the bureaucrats running the Federal Reserve who were responsible for their economic debilitation, they were propagandized by communist front-men like Soros and others in the shadow government who dispensed bribes from China, to politicians, the media, and universities —pawns in the great power game who were blind to their capture as communist stooges.

Trickle down indoctrination: The deplorables (untermensch victims) took-a-knee and rioted to the communist hobgoblin of police brutality and proceeded to burn down American cities. The extreme anarchy: arson, murder and rapes (homage to Lenin’s revolution of November 6, 1917?), were characterized by the brainwashed Chinese pawns: politicians, Marxist professors, and the bribed puppet media, “as peaceful protests.”

Credit card debt soared to 18%. Economically viable work was largely unavailable —except for the government. —if you were allowed into the game.

And the rule, “Nine meals to anarchy,” provided the foundation to lay siege upon our cities…the lights went out…broken windows were covered in plywood and graffiti…nights of fire and smoke…the smell of gasoline leaking from Molotov cocktails.

“Seizure of power is the point of the uprising; its political task will be clarified after the seizure.” V.I. Lenin  (19171106)  Hywell Williams, Days That Changed the World, P.149 Quercus Publishing, PLC, London © 2006