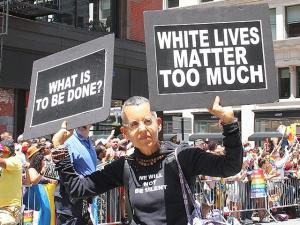 Don’t hold your breath, New Hampshire. The opposition to this bill are the same people who believe NH is too white for its own good. But it’s a start.

A state representative in New Hampshire is picking up where the former Trump administration left off — he’s introduced legislation which would ban trainings based on critical race theory.

Keith Ammon’s bill (via Christopher Rufo) would prohibit — in state contracts, grants and training programs — the teaching of “divisive concepts” such as “one race or sex [being] inherently superior to another race or sex” and that “an individual, by virtue of his or her race or sex, is inherently racist, sexist or oppressive, whether consciously or unconsciously.”

The bill goes directly to the heart of philosophies espoused by those like Robin DiAngelo and Ibram Kendi as it would forbid making “any individual […] feel discomfort, guilt, anguish, or any other form of psychological distress on account of his or her race or sex.”

During a virtual hearing on February 11, Ammon says the idea for the bill came from a state university professor who wishes to remain anonymous due to fear of “backlash.” This leads to two representatives, Salle Fellows and Kris Schultz, offering expressions of, well, skepticism and disbelief. Schultz even laughs and mouths the word “coward” towards the professor. 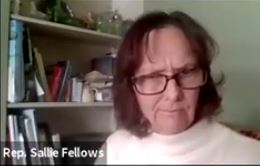 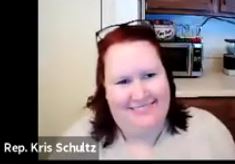 After Ammon goes through various parts of the bill to clarify meanings and definitions, he asks for questions. Ms. Schultz goes first, asking if Ammon believed “systemic racism” exists in the US today. Ammon requests Schultz define what she means by “systemic,” to which she answers “the remnants of slavery and racist beliefs have been codified and normalized in existing systems of government, business and society in general.” Ammon replies “no.”

Schultz then asks if Ammon recognizes the “institutionalized racism” of the Three-Fifths Compromise during the Constitutional Convention. After a quick bit of confusion regarding the actual fraction, Ammon responds that slavery is one of America’s original sins and the point in question has since been rectified.

Representative Jean Jeudy, who spends most of the hearing at a 90-degree angle because his camera is crooked, goes next and simply asks Ammon “Are you a racist?”

“I don’t believe so,” Ammon responds, and elaborates by bringing up his Jehovah’s Witness faith. Jeudy then asks why the professor whom Ammon referenced earlier wants to remain anonymous … to which Ammon reiterates his original point: He/she fears retribution.

Jeudy proceeds to tell the meeting chair that he is “offended” by Ammon’s bill — “enough is enough,” he says. When Ammon attempts to ask Jeudy a question, Jeudy refuses, stating again that he is “really offended as a black person.”