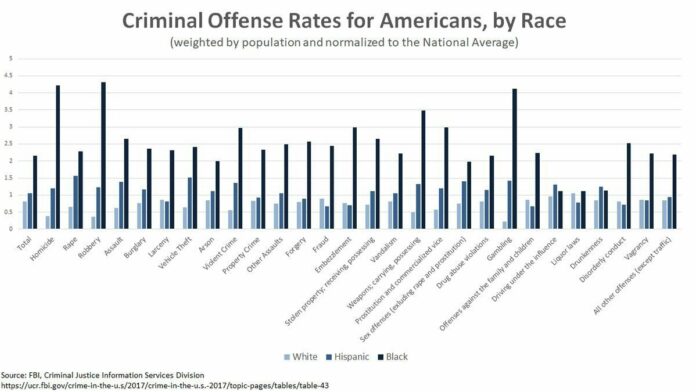 There’s a lack of understanding from the right in what accusations and slanders from the left, like white privilege, systemic racism, and white supremacy, mean.

We own dogs. We treat all dogs equally, or “all dogs are created equal”. We have an expectation of the allowable behavior of dogs, like playing with our children, playing fetch, going to dog parks and interacting with other dogs, and if a dog acts outside these allowable behaviors (like biting or mauling others), they’re generally put down.

Now let’s say some unscrupulous merchant breeds and sells wolves, and says they’re just as equal as dogs, there’s no difference, they’re both canines, they can breed together even though they’re another species, don’t judge a canine based on fur color differences.

Expecting a wolf to adhere to the allowable behavior of a dog guarantees a wolf will be put down at a much greater frequency than a dog, which is both unfair to the wolf, and unfair to a society of dogs and dog owners who are now getting mauled to death by packs of wolves.

A wolf would say it’s living under systemic dogism and dog supremacy having to live up to the standards we have for dogs, and a dog doesn’t understand the wolf’s predicament because a dog has the dog privilege of never having to think as much about acting within the allowable behavior of dogs because it’s a dog.

Now, wolves with the help of the unscrupulous merchant are trying to “dismantle systemic dogism and dog supremacy” to tear down the rules, standards, and expectations we have for dogs that are being applied to wolves saying to apply dog standards to wolves is “oppression”, which basically will mean dogs will be required to live under systemic wolfism and wolf supremacy, and have to act like wolves to survive living under the expectations wolves have for wolves.

The dogs and dog owners, and a few wolves like Wolface Owens or Wolfmas Sowell, who don’t want to have the standards of behaviors we currently adhere to dismantled in favor of a system that works for wolves are slandered as “dog supremacists”.

The truth is, dogs and wolves can’t live together because there is no universal standard that will work for dogs and wolves. It’s one or the other, and both deserve to live free from the other, under acceptable standards that work for each.

And if you point to the cat owning unscrupulous merchant who hated dogs and dog owners all along and caused all this chaos, he’ll call you antisemitic.