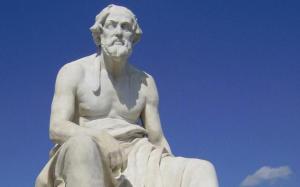 People usually speak of race in a biological sense. It is easy to focus on the material, because it can be measured, quantified, and statistically analyzed.

And biological race is a necessary prerequisite, but insufficient.

So what happened to move us from 3% to 30% if we are the same race now that we were then? Have we degenerated biologically so much in a mere 60 years?

Although there may well have been some biological decline, that cannot be the major factor. So what is it?

We could certainly blame propaganda, public schools, TV and music. But MANY white people exposed to the exact same influences did not take that path.

So it’s not merely that.

It’s time to look at our people in a way that is not purely materialistic. We are not merely biology, and we are not just biological computers controlled by a television.

It is that spiritual aspect that so awes us at the contemplation of the heroism and wisdom and achievements and greatness of our most distant ancestors. And as long as we have some grasp on that, even if we don’t explicitly recognize it, that protects us from the pernicious influences around us, so that we can aspire to nobility.

We hold that sacred chain as we aspire to be our best, not merely physically or intellectually, but also spiritually as we mold our own characters in emulation of the best of our ancestors.

We went from 3% out of wedlock births to 30%, and that is just one measure, NOT because some talking head on TV told us to.

Rather, it happened because we had already lost our grasp on the sacred chain, and without that influence to pull us away from our animal natures and toward ourselves created in the image of deity, we descended to the level of animals living only on a materialistic level.

An important part of our mission is to become worthy, so we can find that sacred chain, grasp it, hold it close, and lift ourselves upward so that we can become more than just our biology.