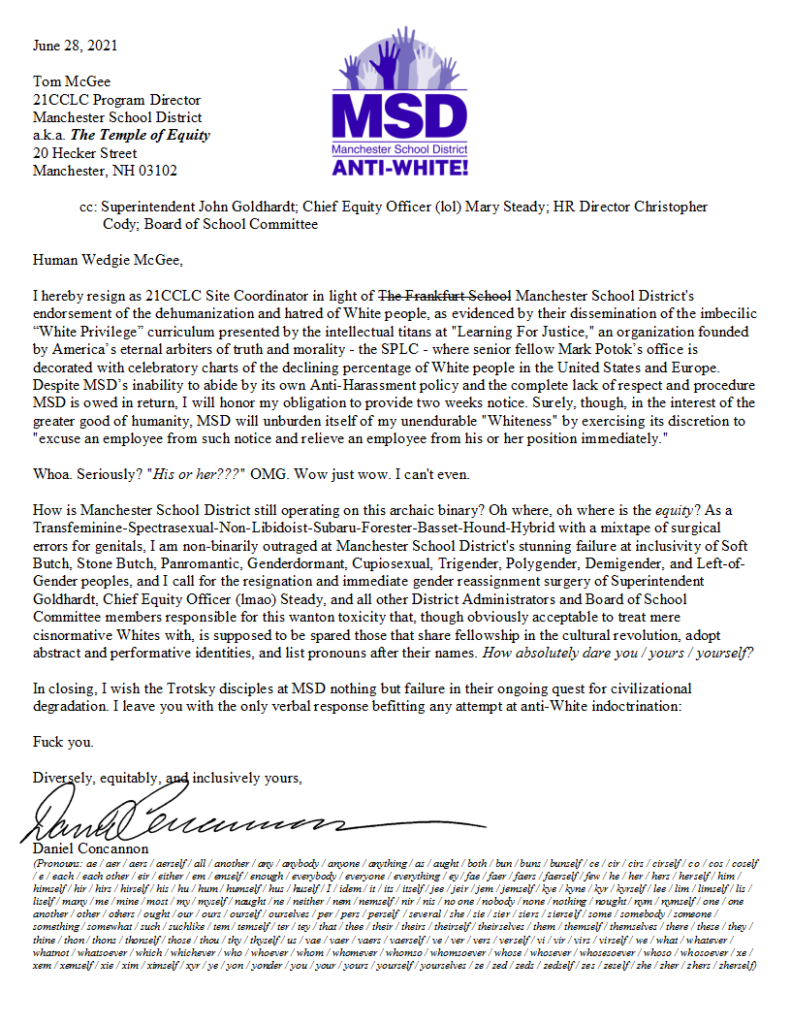 It is no secret that school systems across the country have gone full-retard on wokeness. Included in this is mandatory psychological abuse of European-American children in which they are inculcated with a sense of guilt for the crime of being born. Initially floated as the doctrine of “white privilege” it has now become full-blown “critical race theory.”

The gist of critical race theory, for all practical purposes, is that being born Caucasian is a morally bad original sin for which one must continuously atone. Failure to scrape, crawl and continuously beg forgiveness while admitting one’s moral inferiority just proves the theory, and shows just how guilty the White child is. The proper end of critical race theory is the elimination of “whiteness.”

Any sensible person would see inculcating any child with a sense of automatically being morally inferior and unworthy as profound abuse. The fact this is taking place in government funded schools, by people supposedly entrusted with the well-being of children, speaks volumes about where we are in the genocide agenda.

Recently, an employee of the Manchester, NH School District quit over this practice, and when he did, he issued a scathing and epically courageous letter that has since become public.

“I hereby resign as 21CCLC Site Coordinator in light of Manchester School District’s endorsement of the dehumanization and hatred of White people, as evidenced by their dissemination of the imbecilic ‘White Privilege’ curriculum presented by the intellectual titans at ‘Learning for Justice,’ an organization founded by America’s eternal arbiters of truth and morality — the SPLC — where senior fellow Mark Potok’s office is decorated with celebratory charts of the declining percentage of White people in the United States and Europe.”

The letter ends with:

“In closing, I wish the Trotsky disciples at the MSD nothing but failure in their ongoing quest for civilizational degradation. I leave you withthe only verbal response befitting any attempt at anti-White indoctrination: Fuck You. Diversely, equitably and inclusively yours, Daniel Concannon”

This letter is truthful, and epic for its truthfulness.

It is also notable and newsworthy because of its rarity. Sadly, millions of children across America, of all races, are taught daily that European-Americans are morally sub-human. For the White kids, this is profoundly psychologically damaging and undoubtedly contributes to poor academic and career prospects. And for kids of other races, it contributes to the justification for harming European-Americans, who are being murdered by non-whites at a rate high enough now to qualify as a war under UN guidelines. Far more teachers, committed to student well-being, should be resigning. But, as Jesus noted, one cannot serve two masters, and they have clearly demonstrated that their master is not Truth.

If you are a parent, get your kids out of public school. You can find our FREE home school curriculum here.