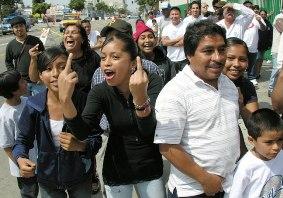 In a healthy society, “once all humane removal was accomplished the administration would then endeavor to collect by whatever means necessary– from the government of Mexico and the southern hemisphere — all of the billions of dollars the European American taxpayer lost by subsidizing the public assistance, health care and education during their people’s stay.” (Source)

The dreamers can relax a bit. Again. At least for a moment.

A federal judge on Friday ordered President Donald Trump’s administration to reinstate fully a program that shields from deportation those who were brought to our nation illegally as children. The operation, known as DACA, for Deferred Action for Childhood Arrivals, was established in 2012 by President Barack Obama after Congress, which had been working on a legislative fix, failed to get the job done.

Obama’s executive order was intended to be nothing more than a stopgap until lawmakers could get their act together. More than eight years later, with Congress as dysfunctional as ever, DACA is all the dreamers have. Still.

(NOTE: Obama’s EO was nothing more than cynical pandering to one specific racial group for the sake of votes and the acceleration of displacing the native White population. His past and present words and actions are clear on this. — ed.)

The latest news, of course, is great — as far as it goes. But as the decision, from Judge Nicholas G. Garaufis of the U.S. District Court in Brooklyn, will very likely be appealed, and with a separate case from Texas that could further complicate life for the dreamers, the end of the line is still a good distance away. As such, the roller-coaster ride is going to go on for some time still.

This really is unconscionable.

(NOTE: What is truly unconscionable is the fact that this was initially ordered without the consent of America’s dwindling native population. Indeed, even black Americans should be utterly outraged.–ed)

Even most folks who are virulently anti-immigrant have got to be able to see that someone who was brought to our nation illegally as a toddler and has lived here ever since is in an entirely different situation than an adult who is caught sneaking across our nation’s border. A kid who has grown up here, attending school, finding whatever work she can, planning for college, for her future, shouldn’t be living in constant fear of deportation. But that’s how it’s been because of the realities of DACA.

(NOTE: What kind of society allows illegal aliens to work and thrive without consequence? Let 300,000 poor European Americans try that in any South American nation and see what happens.– ed.)

The latest ruling will allow as many as 300,000 dreamers to become a part of DACA officially. This will provide them with the protections that are a part of the order and will, one hopes, eventually get them in line to become full citizens at some point down the road.

(NOTE: 300,000 reliable voters for the likes of future progressive lawmakers who implicitly and explicitly adhere to the Great Replacement. –ed)

Once President-elect Joe Biden is inaugurated, he’ll surely move to reinstate DACA. That alone will end the endless back-and-forth cycle that has been life for so many dreamers for so long. But what would be so much better — immeasurably better, surely — would be for a permanent legislative fix that Biden could sign into law.

This shouldn’t be merely a dream.