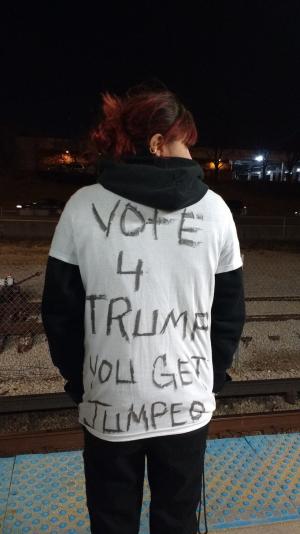 They attempt to claim the moral high ground by claiming the violence they will unleash is necessary to put an end to white supremacy and capitalism. (TRANSLATION: A field guide for punishing White Americans for electing Donald Trump.– ed.)

A 39-page document, Stopping the Coup: The Disruption Guide for 2020, reportedly produced by The Disruption-Project.org and spread about by ShutDownDC, both leftist organizations, was revealed. The document essentially provides instructions for staging a coup rather than trying to stop one, as it claims. The plan is to paralyze commerce and the government and to seize political power in the event that Democrats lose the election. The goal is to disrupt everyday life as an “incentive” to change the American system. Tactics include shutting down highways, disrupting commerce, conducting strikes and boycotts. The document states the need to “force some pillars of power (business, military, media, or other major institutions)” to side with them. As usual, they attempt to claim the moral high ground by claiming the violence they will unleash is necessary to put an end to white supremacy and capitalism. [There is something very fishy about what appears to be a publicity-style announcement of what is, in essence, an act of treason.

If anyone other than the professional terrorists pretending to be social warriors were to do this, they would be in prison within hours of publication – and so would those who fund and train them. Even the document that advocates this treason has a fishy smell to it. Instead of looking like a military strategy manual, which it claims to be, it is designed in attractive and happy-style headline fonts and blocks of pleasant colors.

That suggests it is really designed for public consumption and that it’s real goal is, not to organize a revolutionary coup, but to convince the general public that, when what was organized months ago actually happens, it could be explained as a spontaneous uprising in response to the document. [The creepy suspicion continues to grow that both sides of this election are confronting voters with a good-cop, bad-cop scenario in which the bad cop is deliberately offensive and threatening so the good cop will be seen as their friend. What if the plan all along is to get the “good guy” elected by a huge majority (largely created by revulsion to the “bad guys”), then have the bad guys and their friends embedded throughout government and corporations (what the document calls “pillars of power”) cause an intense wave of domestic terror so the good guy will be hailed as a hero when he calls for martial law – which is what both sides have been working toward all along. Martial law, proclaimed by the bad guy would be strongly opposed by the American people. However, if proclaimed by the good guy, there would be no objection from his supporters because there is violence in the streets and, after all, he is the good guy. Please forgive me for expressing my darkest suspicions. It will make me so happy if the next year proves them to be unfounded.] -GEG