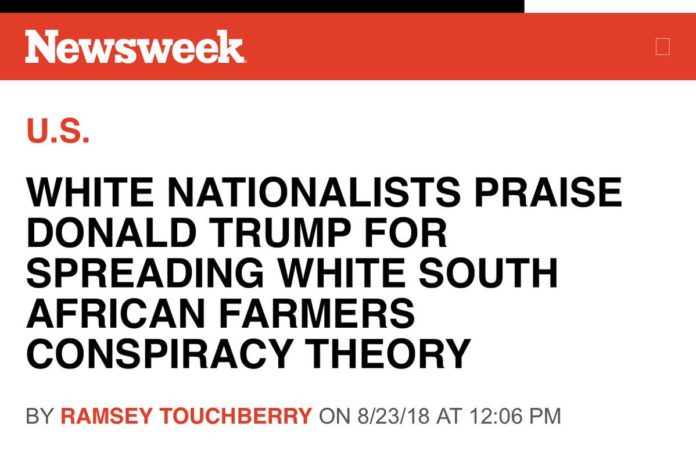 Have Afrikaners Reached the Breaking Point? A warning to White people world wide.

This video is available on BitChute here.

Brendin Horner was the manager of a farm just outside a small town called Paul Roux in the Free State Province of South Africa. On October first, he found several men who were probably trying to steal sheep. They overpowered him, tied him to a fence post, clubbed him, stabbed him, and finally strangled him to death. The flowers mark the spot where he died, and that is the fence post to which he was tied. Here is a photo of Horner, along with two men arrested for his murder. One had 16 arrests, and nine convictions for stock theft.

This is Horner in a field of sunflowers with his girlfriend. She and his father found his body.

Ever since black rule, there have been attacks on white farmers. The Transvaal Agricultural Union reports that in the first half of this year, there were 141 attacks and 26 murders. This headline from The Sun is from just this month, October 5th: “Female farmers sexually assaulted, tortured, and murdered in latest horrific attacks on South Africa’s white farm workers.” 44-year-old Chantel Kershaw was the latest victim. Often, blacks torture whites in the cruelest ways, and sometimes the murderers steal almost nothing. Do whites *ever* behave this way? Can you show me even one case of a gang of whites who attacked a black couple, tortured them, made the man watch while they raped his wife, and then killed them? You can’t. It doesn’t happen.

There is an abiding hatred among many South African blacks who want to kill all whites, especially farmers, and take their land. Julius Malema is the leader of the third largest political party in South Africa, the Economic Freedom Fighters. He promises to take land from whites, and likes to sing a song in the Zulu language with the chorus, “Kill the farmer, kill the Boer.” The ruling African National Congress defends the “Kill the Boer” song, and says it is not hate speech.

The Brendin Horner murder may be something approaching the last straw. On October 5, several thousand whites gathered for a demonstration at the town of Senekal where the men accused of the murder were being held. Many had driven all night to get there. There were prayers outside the courthouse, along with signs that said “Boer Lives Matter” and “Stop the Farm Killings.”

But there was something else. Something very unusual. White people rioted. A group of them forced their way into the courthouse building, apparently intent on taking justice into their own hands. They didn’t get into the cells where the men were being held, but they overturned a police van. And then . . . they burned it.

Dan Roodt, a 12th-generation South African and founder of the Pro-Afrikaans Action Group, explains why this is important. [See video]

Mr. Roodt notes that when André Pienaar, one of the leaders of the Senekal demonstration was arrested, Afrikaner lawyers rushed to defend him at no charge. This is part of a broad sense of unity, and a new quality to Afrikaner anger. [See video]

Whites are only 9 percent of the population of South Africa. They are a minority in a hostile country, and this is the prospect whites face all around the world, as their numbers decline. Afrikaners are on the front line. [See video]

Is there no way out? Mr. Roodt believes that Afrikaners are regaining the spirit of resistance of their courageous ancestors. [See video]

Tensions are rising – on both sides. Julius Malema, whom we met earlier, was on television to explain that he was going to take his men to another demonstration planned for the town of Senekal: [See video]

I hope there will be no civil war. I hope there can be a peaceful solution that gives all races in South African a way to pursue their destinies – apart from each other. There is already a small beginning that shows how this works: the all-white settlement of Orania, where close to 2,000 Afrikaners lead an ideal, bucolic life. There is a huge waiting list of people who want to live there.

Isn’t it obvious that the solution is disengagement – some form of separation? And not just in South Africa but in the United States? Does anybody thing this is the happy ending – or even a promising beginning? This is Minneapolis, just this year. You get strangely similar pictures in France, where North Africans riot. And isn’t it odd to find the same thing in Britain? In Sweden, this is what happened when non-whites didn’t get their way. And this was a light-hearted celebration of immigrant rights on the Turkish border with Greece.

It’s not hard to understand. Multi-racialism doesn’t work. People need countries of their own – especially white people who are a small minority of the world’s population and who have already taken in far more strangers than the rest of the world combined. It’s time we realized that this multi-culti experiment has failed – everywhere. The longer we refuse to recognize the obvious, the longer we keep trying to do the impossible, the harder it will be to find a peaceful solution.

As Dan Roodt says, the rest of the world must pay attention to what is happening in South Africa where the families of victims put up crosses in memory of the plaasmoorde, of the torture and murder of white farmers.

Brendin Horner will not rest in peace until his people – not just the Afrikaner people but white people everywhere – can live in peace, in communities, regions, and nations that will always be theirs.

So Much For Fox News

Israel Must do More for Peace Process, Urges Envoy

2020 And Beyond: Violence Will Be Inevitable No Matter Who Wins