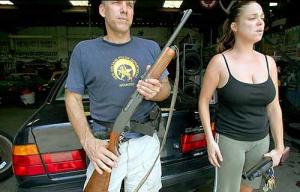 The elite enablers of the violent Left will not be able to contain the monster they created. Their revolutionary logic would play out in a series of confrontations, and the revolution’s next stage would depend on these confrontations’ outcomes. (NOTE: The usage of the term “deplorables” herein is applied primarily to White conservative Americans. Never forget that. –ed.)

The following is an excerpt from a much longer analysis of our current age: Revolution 2020.

What If the Rulers Win?

Victory for the Democratic Party is a recipe for violent strife.

The lack of moral-political authority at the head of the ruling class has been arguably the most important and least remarked fact of public life in 21st-century America. Most visibly since 2008, its leaders have led primarily by pulling rank—denigrating ordinary Americans and calling attention to their own elevated stations in government and society—and by courting the coalition of groups driven by intersectional hate.

After an electoral victory, these leaders—the elected officials, the deep state bureaucrats, the corporate and finance chiefs, the educrats, etc.—will be able to wield power to the extent of the losers’ complaisance and their ability to satisfy the intersectionals’ ambitions and hates. Moderating and meshing these contrasting requirements would be hard even for exceptionally astute and potent persons. But neither Joe Biden nor Kamala Harris has talent, personal following, or moral authority. Hence, the winners would be hostages to the war that their own activists would wage against the rest of America, and to the deplorables’ resistance.

For most ruling class notables, enjoying and parceling out victory’s prerogatives is the revolution’s point. They would prefer to suppress the deplorables while minimizing disruption of the economy and avoiding violence. For these chiefs, rubbing the deplorables’ faces in excrement is mostly an instrument of conflict. But for the intersectionals, it is the revolution’s very objective, its driving logic. For them, vengeance is electoral victory’s foremost prerogative. Determined as the chiefs may be that the intersectional tail must not wag the revolutionary dog, the fact is that each and every part of the intersectional coalition sees itself as the dog.

For their part the deplorables would not accept the legitimacy of the Left’s victory in 2020 any more than the Left accepted the Right’s victory in 2016. Why should they? Lacking any hope of federal protection, they would retrench behind such state, local, and private means of resistance as they may have, while they sought effective national leadership. Sensing that disobedience to the point of violence had become the only effective means of defense, they would respond to challenges with force. The revolution’s logic would play out in a series of confrontations, and the revolution’s next stage would depend on these confrontations’ outcomes.

Understanding these confrontations requires reconsidering what happened in America after 2016, and especially in 2020. Elected officials of the Left acted as laws unto themselves regardless of federal law, according to the principle “stop me if you can.” The Trump administration’s passivity validated their decisions. All manner of bureaucrats, corporate officials, and employees—indeed anyone who wielded any kind of authority—came to believe that they had the right and duty to police, to command, and to punish whoever offended their sensibilities.

(“the logic that drives each turn of our revolutionary spiral is Progressive Americans’ inherently insatiable desire to exercise their superiority over those they deem inferior.”)

This phenomenon recalls social practice in the Soviet Union, China, Cuba, North Korea, East Germany, etc. The sense of arbitrary authority over the regime’s outlawed enemies is a hallmark of totalitarianism. The alleged offenses matter little and the truth not at all. Even after accusations prove to be hoaxes, the narrative’s usefulness and being on the right side is all that matters. The Right was slow to learn that lesson. But learn it they did.

Intersectional groups exist regarding each and every facet of life to make as much trouble as they can for whoever differs from them. Following the Left’s victory in 2020, attorneys general, agency potentates, mayors, and corporate officials who are part of or partial to these groups would see it as more to their advantage than ever to act against deplorables: investigations to harass, lawsuits to bankrupt, arrests to defame, seizures of property, firings, cancelings, restraining orders, custody of children…there is no limit to how people can be hurt by willful uses of power.

As the intersectional groups were swollen by recruits during the post-2016 period, their adherents became more independent as they became more radical. All of the above surely augurs assaults on deplorables increasingly pervasive, unpredictable, and violent. It also leaves the deplorables no alternative but to respond in kind.

In sum, the Right is likely to emulate the Left’s 2016-20 Resistance to the best of its abilities and limits of its powers. And since a fully empowered Left is likely to be far more kinetic in its response to Resistance than Trump had been, violent clashes would be inevitable.

At all levels, officials of red states are the deplorables’ first line of defense. And indeed, during the post-2016 period some such officials used tactics similar to their leftist homologues: refusing to enforce dictates from above, and declaring their jurisdictions “sanctuaries” for one or another’s causes. Correctly, they judged that just as the Trump administration was not going to send the army to California to enforce immigration laws, nobody was going to send force majeure (major force) to their jurisdictions to govern in their stead.

Were the Left to win in 2020, that assumption would be tested. Every U.S. agency has a SWAT team. The Biden/Harris administration’s appointees would surely want to use them to crush resistance to any number of edicts. Among the most interesting questions concerning such an administration is the extent to which it would try to restrain its members from major confrontations with red states and with private groups of Deplorables.

Though the material balance of forces would be heavily weighted on the Left’s side, it would not prejudge the outcomes simply because government agents are unaccustomed to opposition—check-collectors rather than heroes willing to suffer harm for a cause. Believing in nothing, they are unlikely to go beyond initial skirmishes into guerrilla war against an armed population fighting for a way of life.

Yet there is no doubt that such an administration would lack the power as well as the inclination to restrain the manifold pent-up acts of vengeance that its empowered, energized base would unleash on the deplorables in countless instances. Some have suggested that such an administration could tame that base by offering sinecures in exchange for calm, and that only a lack of money would limit its ability to buy it. But it is doubtful that money would extinguish the taste for raw force to which so many had become accustomed in 2020. Hence, violent confrontations, all over the country, would be virtually certain.

Where these confrontations led would depend on how the Right side of American life organized itself politically after Trump’s defeat. The 2016 Republican primaries’ unambiguous lesson was the voters’ wholesale rejection of the Republican Party’s establishment. Two candidates out of seventeen, Trump and Cruz, were serious alternatives because they ran against both Parties. Nothing that has happened since then, or that would happen were Trump to be defeated in 2020, would make establishment Republicans any less disgusting to deplorable voters.

In short, American politics’ Right side will be looking for leaders eager to do unto the Left what the Left has been doing to them, for leaders who organize effective resistance, and who offer a prospect for saving their constituents’ way of life.

Necessarily, the race for leadership would center on the besieged deplorables’ plight. This would mean organizing nationwide measures such as tax strikes and other actions to protest or cripple major administration decisions. It would also mean nationalizing opposition to local instances of injustice, perhaps interposing conservative elected officials between citizens targeted by injustice and their tormentors. It would mean fostering and leading campaigns of civil disobedience.

After 2016 the Left had pretended to be frightened of populism. It would be incumbent on whoever would lead the Right side of American life after 2020 to give them real reasons to fear it.

Since to lead is to show the way, contenders for leadership must frankly distinguish what is possible and what is no longer so. They would have to acknowledge the extent to which a half century of ruling class dominance has reduced the proportion of people who believe that “all men are created equal” and that none may rule another except by reasoned persuasion. Hence, now, they would have to start from the fact that republican life is possible only among these Americans, and not possible with people insensible to all manner of freedom.

To avoid having the left’s priorities forced on them and eschewing desire to force anything on the Left, to avoid a civil war of which the armed forces must be the arbiter, they would ask their voters to support plans for so de-centralizing government—that is, for a much-expanded federalism—as to guarantee their right to live the kinds of lives that other Americans are no longer willing or able to live.

If, in the event of the Left’s victory in the 2020 election the Right does not come up with such leadership, the ruling class’s inability to control the inevitable clashes between the intersectionals and the Deplorables really is likely to lead to a civil war that only the military can end. That might end the revolution on the usual terms: right is the interest of the stronger…

…the intersectionals are violent enemies—who must be dealt with as such. Fortunately, there are more spoiled children among them than heroes.