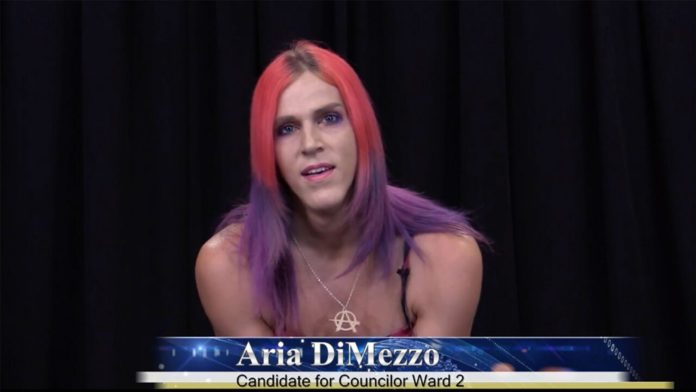 New Hampshire – Aria DiMezzo is a self-described transexual, satanist, and anarchist Libertarian. She ran for Sheriff of Cheshire County in the primary on the platform “F*** the Police.” She claims the system is totally broken…and since she won the primary nomination for Sheriff, she is correct. People whose IQ is lower than a rock voted for her. She also describes herself as a “She/Male.”

So let’s see: we have an Antifa symbol, and “F*** the police. Just what everyone wanted for the top cop in a county. Cheshire County, New Hampshire, you are the dumbest electorate outside of the fools who elected a host of left wing Democrats like AOC.

She ran to prove a point – and boy did she prove it. The Republican party chair actually congratulated her for the victory.  Is everyone in America delusional?

Her point, by the way is that people walk into a voting booth not having any clue about the person they are voting for. That’s true. Ignorant voters are among the most dangerous people in the country – and this ‘transsexual, satanist, anarchist” just proved it. She/he doesn’t plan to campaign against the incumbent, Eli Rivera, who is a popular Sheriff running for his 5th term. She managed 4,211 votes out of the election, which easily defeated the normal GOP candidate. She also advocates anarchy – and uses this election result to illustrate her point.

“I’m running for sheriff because I oppose that very system, and the sheriff has the most hands-on ability in Cheshire County to oppose that system,” The system that let you down by allowing me — the freaking transsexual Satanist anarchist — be your sheriff candidate is the same system I’m attacking. I’m sorry, and I know it hurts to hear, but that system is a lie…

…Sweet Satan, how can you not be an anarchist?! Between 75 and 80 percent of the primary voters — the ones alleged to be more politically aware than the average voter — were completely and totally ignorant of who they were voting for! What is the percentage with the average voter? 90 percent? 95 percent? These people are deciding who gets to rule you.

She is calling for Cheshire County to secede from both New Hampshire and the US.  Her Twitter account calls herself #Godless & #Lawless.  Way to go, Cheshire County.