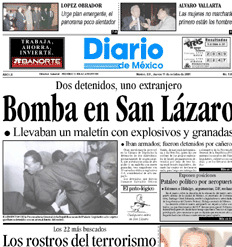 Every once in a while something really interesting works its way back out of the memory hole, and I give credit to an anonymous Gabber for bringing this long-forgotten event to my attention.

European Americans United and our news site, Western Voices World News, were not founded until 2007. As a result, we never covered a lot of the events surrounding the run up to the war in Iraq. Even so, it is important to shed light upon this, as the results and the U.S. continuing presence in the Middle East continues today. The “War on Terror” and accompanying anti-American legislation such as The Patriot Act have a profound effect on our current quality of life, so it is worthwhile to revisit the era that gave rise to these.

So far, as a result of the United States war against Iraq, there have been 288,000 Iraqi casualties, of whom approximately 200,000 were civilians. (1) This is one of the most conservative estimates, with some studies arriving at numbers 300% larger. (2)

Given that the U.S. invaded Iraq in 2003, it is astonishing to realize that even seventeen years later, the U.S. military is continuing to suffer casualties, both killed and wounded. So far, the count of American soldiers killed is 4584, and the number of wounded is around 30,000. (3) But these figures hardly even compare to the number of veterans and soldiers who, due to their experience in that area of operations, have killed themselves: a very sobering 78,000 since 2005. (4)

People who were connected to current events in 2002 – 2003 remember the media blitz and run up to the War in Iraq. There was a constant refrain from all public members of the administration that Saddam Housein, the leader of Iraq, had stockpiles of chemical and biological weapons with an intent to use them on the United States, and could be mere days away from developing a nuke. (5) Of course, after the invasion, no such weapons or programs were found. In fact, what little was discovered amounted to little more than the remnants of weapons the U.S. itself had provided. (6)

So seventeen years ago, the United States went to war against a country stated to have weapons of mass destruction and plans to use them against the U.S., and the nonexistence of those weapons has been well known since 2003. Yet at least 288,000 Iraqis have been killed, we have had over 100,000 of our own troops lost to direct death, maiming and suicide, and the United States military is still there, continuing to take casualties.

If our actual reason for being there had truly been avoidance of a terrorist attack with weapons of mass destruction, the U.S. should have left Iraq in 2003, and made as full a restitution as possible for a horrific and unconscionable mistake. Instead, our heaviest military actions after the initial attack came in 2007-2008, 5 years after learning the Weapons of Mass Destruction did not exist. And U.S. troops are still stationed there today. Therefore, the reasons given to the American public for justifying the mass murder of hundreds of thousands of civilians, the overthrow of a legitimate government, and countless American dead … are a lie.

If the Administration wasn’t truly concerned about weapons of mass destruction, then what was the true reason for invading Iraq?

Tracing all the connections would be too time-consuming, especially since Stephen J. Sniegoski has already done an excellent job of uncovering the truth in an article in the Unz Review. Thus, I will summarize: radical Zionist partisans such as Paul Wolfowitz and Richard Perle secured positions at the highest levels of foreign policy influence in the United States government, and the United States invaded Iraq solely to advance what certain Israeli think tanks believed to be Israeli interests. To anyone unfamiliar with the situation, this sounds like a crazy assertion, so I encourage you to read the Sniegoski article cited, and start looking through the copious documentation of this reality.

So what does this have to do with Mexico?

The reason all the foregoing was necessary is to establish why agents of the Israeli Mossad would target the Mexican Congress. The U.S. war against Iraq had nothing to do with protecting America, and everything to do with advancing an Israeli-Zionist agenda. So when Mexico refused to support the United States’ push for war in the United Nations, (7) this was an affront, not to the United States, but to Israel. Thus, it would be Israel who worked behind the scenes to bring Mexico into line with the plans of Zionist think tanks that were implemented by the United States, but conceived in Israel.

And this is where we come to the gigantic memory hole. An anonymous poster on Gab called my attention to an incident in Mexico on October 10, 2001. This incident involved two Israelis — Saar Noam Ben Zvi and Salvador Gersson Smeck — arrested in the Mexican Congress. At the time of their arrest they had dynamite, detonators, hand grenades and pistols in their possession. This event is completely missing in major Western media, but made the front page of the Mexican newspaper “Diario” on October 11, 2001, and other Mexican newspapers as well.(8) It was also covered by “The Voice of Aztlan.” The Mexican government issued a brief statement about the arrest at the time, which is preserved at the Internet Archive. (9)

Naturally, if you or I were caught carrying weapons while trying to enter a legislative assembly anywhere in the world, our fate would be sealed, and it would likely be short. But that’s because we aren’t employed by the Mossad. Working for the Mossad, as was the case for Senor Smeck(10) seems to have its perks, including a world-wide “get out of jail free” card. After some heavy-handed negotiations between Israel and Mexico’s secretary of foreign relations, Jorge Gutman, the two Israelis were released.(11)

From the perspective of a typical person hypnotized by the TV, events seem to unfold according to a carefully crafted narrative that does not raise alarm. But the real world is far more complex, and a lot goes on behind the scenes that is unknown. The events at the Mexican Congress on Oct 10, 2001 provide an example of how the foreign policy of nations can be shaped through the very real threat of violence and death against its legislators. Does the story end there? No. According to The Voice of Aztlan, this was just one part of a larger plot for Zionist partisans to exercise ever-greater control over Mexico. (12)