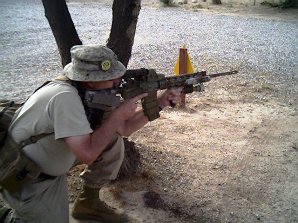 Leftist rag blames president Trump, not the real Marxist agitators such as BLM, Antifa, and the media.

Researchers warn there may be more violence.

In the video, the host of a local independent news radio program surveys the late-night shadows of a Kenosha, Wisconsin, car lot. You can just make out four men, long rifles in their hands, as they pace on top of the building. “We got militia on the roof here, and it’s pretty neat,” he says. On the ground, the videographer chats with other people he identifies as part of “the militia” — including an eager and excited-looking kid who tells the videographer his name is Kyle.

Kyle Rittenhouse would go on to allegedly kill two people and injure a third later that night. In the aftermath, the extent of his ties to militia activity — and militia activity itself — have been widely discussed: Are militias hate groups? Was Rittenhouse actually a part of a formal militia group? When people who identify as militia members show up in the middle of a protest … whose side are they on?

For the purposes of this article, when we refer to the militia movement, we are referring to an umbrella term that encompasses paramilitary activists and groups with strong anti-government leanings. But beyond that, modern militias are hard to explain and categorize — what even counts as a militia is up for debate. One thing is for sure: There is no one militia — not in Kenosha that night and not anywhere in the country. Instead, experts say, “the militia” is really a multifaceted movement with fluid boundaries. The key to understanding that movement’s role in the chaos of 2020 is knowing just how difficult it can be to pin down what apparent militia members believe — much less how they’re connected to each other and the broader movement.