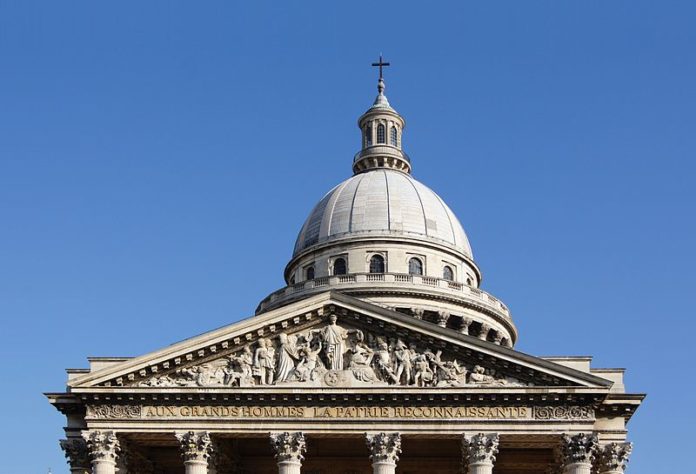 I am not going to spend my words on the U.N. definition of genocide or the copious proof that people of European ancestry are being subjected to it. This fact is widely admitted and celebrated by the ruling classes of all Western European-founded countries and hatred of White people is gleefully tweeted without penalty. The hard reality is that about 2% of the people on earth are White women of child-bearing age, and our natality rates are below replacement level. Meanwhile our governments actively cooperate to import replacement populations. This isn’t a coincidence, and the math is clear.

The term “genocide” is a compound word, formed from the ancient Greek word “genos” meaning “race, stock or kin,” added to the Latin “-cide,” meaning “killing.” The very existence of the term “genocide” implicitly accepts two important facts of reality: that race is real and that destroying a race is so uniquely evil it requires its own unique word.

Unfortunately, in modern thinking, the concept of genocide is intimately linked to the Holocaust. Because of this linkage, the typical person will not recognize that a genocide is taking place unless they can see people being loaded into cattle cars and gassed. In their minds, no gas chambers means no genocide. So describing our plight as genocide doesn’t compute as real. That is why I refer to extinction.

As the word genocide conveys, each group of people has unique genetic attributes. Because many of these attributes, such as blue eyes, are recessive traits, they will only manifest to a significant degree within a group sharing high genetic similarity. This also applies to less visible traits, such as lactose tolerance. Those Europeans who retain the ability to digest lactose into adulthood actually have a different genetic source for that trait than the Africans who can digest lactose. So the offspring of two lactose persistent parents – one European and one African – would not have that beneficial characteristic from either parent due to lack of reinforcement. This same reality applies to ALL of the distinguishing traits that make us what we are.

Likewise, as Brett Stevens has described, politics is downstream of culture, and culture is downstream of genetics. Cultural development is an outgrowth of genotype. Even with populations that have similar average intelligence (such as between Korea and Northern Europe), the cultural outcomes are dramatically different. This finding is demonstrable across all populations around the world.

When we think of European culture we might first think of pre-Raphaelite art, Bach’s Brandenburg Concertos or Kölner Dom in Cologne. But some of the most fundamental ideas of our culture are unique to us and have existed in no other culture on the planet.

A great example is the concept of a free man bearing arms. Although uniquely codified only in the United States, as Stephen Halbrook discussed in his exhaustively researched “That Every Man be Armed,” the concept of both a free man, and that free men can and should be armed, originated in ancient European civilizations. Not surprisingly, polls of support for the Second Amendment show that non-Europeans living in America favor its abolition by a nearly 3:1 margin. Democracy + White displacement = Kiss your guns goodbye! That’s a fact.

Our great history of innovation is no mistake either. Even when compared to populations of the same average IQ, our innovation is dramatic, ranging all the way from Occam’s Razor to Sir Isaac Newton and beyond. The entire language of science is in German and English with occasional diversions into either Latin and Greek. As discussed by Victor Hansen in “Carnage and Culture,” European people have a unique type of independence such that a man will be able to “break contact and continue mission,” which makes us the most effective fighters on the planet. This attribute is distinct from self-serving hedonistic individualism, because although the independence I describe can subject the man to criticism if he fails, he is actually undertaking it in service to advancing his people rather than his whims.

It has long been said that the Europeans innovate and the Asians imitate. Although there are certainly exceptions, this is broadly true. Asians had a substantial head start in terms of writing, but Europeans caught on quickly and rapidly surpassed them in nearly all fields of endeavor, despite having similar average IQ. Our brains are literally wired differently.

The extinction of European peoples throughout the world is near at hand. With that, our unique innovations that benefit both ourselves and all other races will be lost. Our unique cultural commitments to truth, beauty and right will likewise be extinguished. Long before the end, as we are increasingly outnumbered, we will lose the treasured cultural inheritance of the right of self defense. Already, we have practically lost the right to freely speak our minds.

When our extinction is completed, it will be forever. Likely, the last of us will die under horrific torture, as currently happens to White people in South Africa. And never again will arise the light that could be seen in the Parthenon, the Pythagorean theorem, Beethoven, or Pasteur. This is what extinction ultimately means and why genocide is uniquely evil.

The hour is late, so I have only one question for you: what do you intend to do about it?

Why Isn’t This the Feel-Good Story of the 21st Century?

‘I Am Antifa’: Antifa Supporter Sarah Iannarone Could Be Portland’s Next...