This article in its entirety appeared on Local15tv.com. The real story is below the ‘Read More’ fold.

(MOBILE, Ala.) Mobile Police are investigating after they say a man was attacked by a group of people.

It happened Saturday night in the 1000 block of Delmar Drive. Witnesses told police the victim was assaulted by several subjects from the neighborhood. Police say officers tried to local the people, but could not find anyone.

The victim was taken to USA Medical Center where he is in critical condition. (End of article) 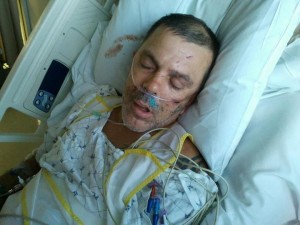 From the Facebook page of victim’s sister, Ashley Parker: This is my brother. He was beaten by 20 blacks last night. He is in ICU with bleeding on his brain. It was the scariest thing I have ever witnessed. They chased him and beat him on the front porch of his residence. They hit him with brass buckles, paint cans and anything they could get their hands on. We haven’t heard from the police if they have been arrested yet. The news won’t touch this story. As one of the blacks left…the bitch said “Now thats justice for Trayvon ” People. You need to wake up and open your eyes because the shit has hit the fan.

The Truth About Tech

The Left cancels us and turns on each other