Carol Swain, who is black, says what the so-called “extremists” have been saying for decades. At right is Mark Potok, one of the head honchos over of the $PLC, one the leading bigot$ and fomentor of hate in America today.

In case you missed the story, last November 4th a polling precinctin Philadelphia, PA was patrolled by an organization called the New Black Panther Party, a Marxist group that in 2000, was listed by the Southern Poverty Law Center as a racial hate group. Video footage shot in 2008,show Black Panther precinct workers intimidating white voters. This wascovered by the news organizations, and resulted in charges being filedby the Bush Department of Justice, whose job it is to defend andprotect the voting rights of all Americans.

What should have been an open and shut case has become something more troubling, after the Eric Holder-led Justice Department dropped charges against the Black Panthers, who supported President Obama. Currently, this decision to drop the charges, is being challenged by the U.S. Commission on Civil Rights, (an organization with which I am affiliated). 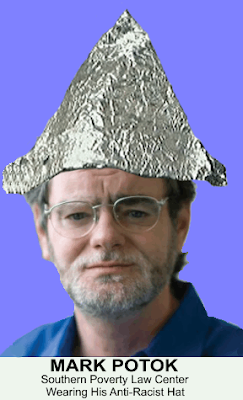 Now this is the part where things really get interesting.

The SPLC has been mum on the issue, despite the fact that in 2000,it included the New Black Panther Party among its annual list of hategroups. In fact, what is most shocking is that the SPLC has spent farmore resources hounding conservative organizations, such as the Center for Immigration Studies, and prominent citizens like CNN’s award-winning anchor Lou Dobbs, than it has protecting the civil rights of American voters, which includes white people as well as black. The unrelenting attacks on Mr. Dobbs and others are shameless.The once venerable organization wages war against conservativeindividuals, principles, and organizations. How unfortunate forAmerica. How unfortunate for the organization’s founders.

There is a name for what has happened. It is called “mission creep.”Mission creep occurs when an organization strays beyond its originalpurpose and engages in actions antithetical to its goals. Rather thanmonitoring hate groups, the Southern Poverty Law Center has become one.

RACE: Are We So Different?

Ralph Nader: McCain and the Liberty