Home Archive-1 The Isle That Rattled the World

The growth of Iceland’s banks abroad was astonishing. When they fell, they left a mess to clean up that spills across the globe.

A boy charged to the front of an angry crowd here recently and tossed a carton of skyr, a popular local yogurt-like snack, at the Parliament building. It splattered on the rough-hewn stone.

He and thousands of Icelanders were protesting one of the strangesteconomic failures of the global financial crisis. This past fall, everybank that matters in this tiny nation — that is, all three of them –failed. Iceland’s currency, the krona, became worthless beyond itsshores. The country’s financial system stopped working.

“We are pissed off at the government,” said one young man, pausingbetween fusillades of eggs. A roll of toilet paper arced across theNordic sky.

Iceland is an extreme casualty of an era in which it becameextraordinarily easy to borrow money. But it was more than that: Anexamination of the nation’s banking system, which collapsed over about10 days this autumn, reveals the degree to which Iceland was one of theinternational financial bubble’s most enthusiastic players. Home tofewer people than Wichita, Kan., Iceland became so leveraged and sodeeply intertwined with the global financial infrastructure that itscollapse has rattled the world from Tokyo to California to the MiddleEast. 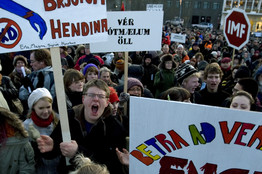 In Japan and Hong Kong, bond buyers got stuck holdingall-but-worthless debt. In Beverly Hills, a real-estate developer wasforced to default after teaming up with an Icelandic bank to buildcondos near Wilshire Boulevard. A German regional lender, BayerischeLandesbank, suffered big losses on its Icelandic investmentscontributing to its need for a €30 billion ($42 billion) bailoutpackage.

And in recent weeks, Naomi House, a hospice in southern England, hadto cancel a service in which aides made house calls to give the parentsof dying children a helping hand. Some £5.7 million ($8.7 million) –two-thirds of its available cash — is frozen and may never be fullyreturned. It was deposited in an Icelandic bank.

Khalid Aziz, chairman of the hospice trust, says he didn’t thinktwice back in 2005 when Icelanders bought the local bank. “With theglobalization of markets,” he says, “everybody owns everything thesedays, don’t they?”

Until very recently, the 21st centuryhad smiled on Iceland. Last year, it boasted the highest standard ofliving of any country, according to the United Nations — outrankingthe U.S., for all its McMansions and drive-through coffee shops, andSweden with its government-paid parental leave and other generoussocial benefits. How Tyranny Came to America

Sweden: Collaboration, Then and Now

The Changing Face of Britain’s Schools

Was America Ever a White Nation?